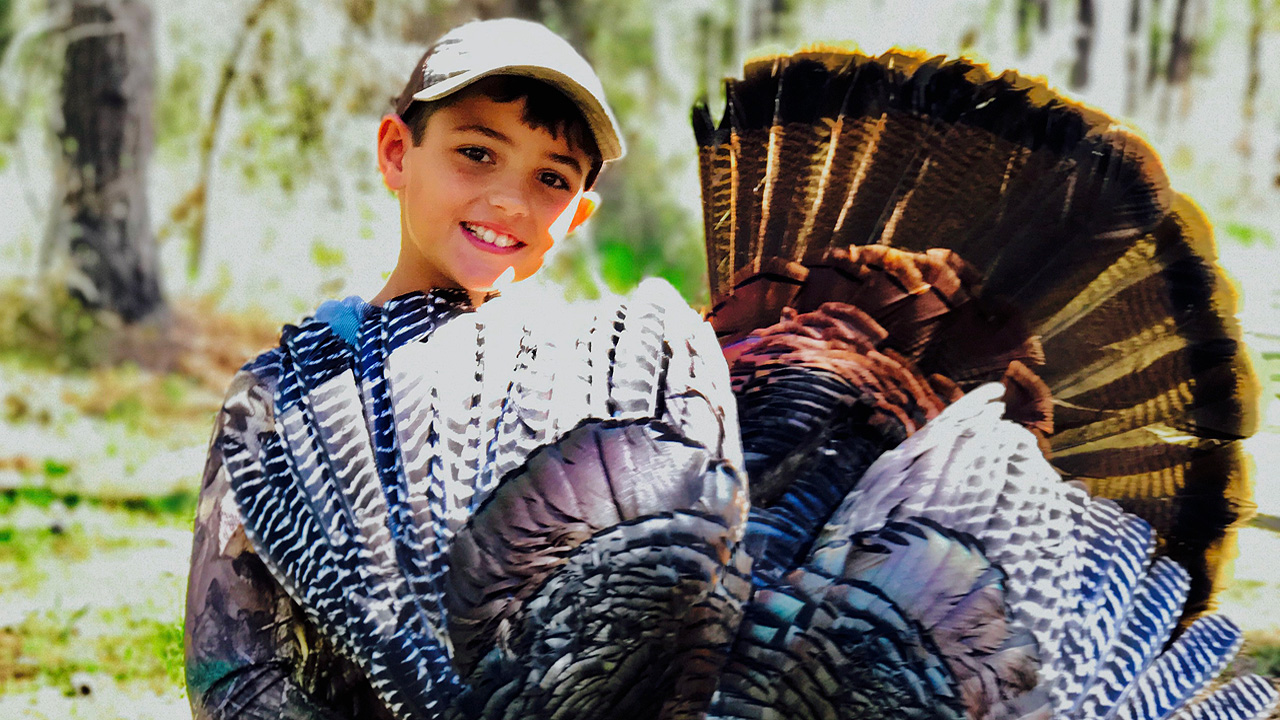 This past April first was like no other I have ever experienced. This is normally a really busy time of year for me and I am normally helping coach my son’s 9u baseball team on the weekends. It just so happened that my son and I got the weekend off and got to go to the woods to chase the old thunder chicken. Taylor has been hunting with me several times but has never had to opportunity to harvest an animal. Little did I know that this Saturday that was all going to change.

The morning started bright and early at 5:30 am. Taylor is not a morning person but this morning he jumped out of bed and was ready to go before I could cut off my alarm. We got changed into our tactical apparel, had some breakfast, loaded up the car, and off we went. I had a good idea where the turkey were roosting so in no time we were set up and waiting on the first gobble of the hunt. I had Taylor sitting in my lap and we were concealed by some green leafy bushes that were scattered throughout the pine plantation. The decoys were set in the food plot and Taylor had his 20 gauge ready for the first gobbler that dared challenge our Jake. I gave Taylor a few instructions and it wasn’t long before the woods came to life.

The turkeys started gobbling around 7:15 and continued to gobble until about 7:45 when they pitched down out of the trees. The only problem with our morning hunt was that we were in the wrong food plot. The birds were on the ground about 200 yards away and they weren’t coming to my calls. I could get the gobbler to answer but he wasn’t about to leave his hens and come our way. It didn’t take long for the hens to take our bird down into the hardwood bottom and the woods became silent. Our first encounter was over but we were far from being done.

Taylor and I walked the woods that morning and did not hear another gobble. The terrain was pretty tough to walk on, even in my new tactical boots (check it out here), and we soon began to lose patience. I used every trick in the book to call the turkeys but sometimes they just won’t gobble. Frustrated, we walked back to the truck so that we could ride to a nearby field and try to glass a bird. As I was turning onto one of the property roads, I noticed a black spot in the road about 300 yards away. I stopped the truck and grabbed my Hawke binos as I slowly opened my truck door. Once outside the truck, I confirmed that the black spot was a gobbler and I passed the binos to my son. I told Taylor to get ready and I backed my truck around the corner and made sure that we were parked out of sight. We got our Realtree gear on and made our way to the edge of the road. We kept our gear in our Backpacking pack that is purpose-designed for hunting. When going hunting, it’s all about taking the right gear with you, so make sure that you’ve got everything that you need beforehand – this might require a trip to somewhere like Bass Pro Shops, but you can use a Raise promo code to help you get a discount on your purchases so that your money goes further!

I slowly looked down the road and made sure that our bird was still there. I placed Taylor on a pine tree and made sure he was ready. I belly crawled through the ditch and out into the road with my turkey fan out in front. Once in the road, I began to yelp and cut with my mouth call. It didn’t take long before I saw a white head coming my way. The bird never gobbled, but he came down the road in full strut before stopping in front of me at about 30 yards. I looked over at Taylor and told him to shoot. With a squeeze of the trigger, the bird folded. I was a perfect shot.

I don’t know who was more excited! Taylor jumped up and I caught him in mid-air as he jumped into my arms. I’ve seen him hit home runs and score touch downs but they didn’t compare to this celebration. I swung him around while holding him high in the air. I could not believe that we had just fanned in this beautiful bird and Taylor finished it off with a perfect shot. I put Taylor down and we ran up to the bird as he began to flop around in the road. The bird had a paint brush for a beard and nice long spurs. I told Taylor that this bird was at least three years old and that it was one heck of a first bird. After taking pics and calling everyone we knew, we headed to Little’s Taxidermy with our trophy. This bird was going to have a special place on Taylor’s wall! I don’t remember my first turkey but I will never forget this hunt. There is only one first turkey and I am so glad that I got to be there for this one! 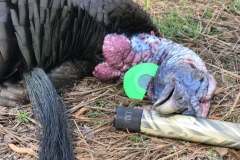 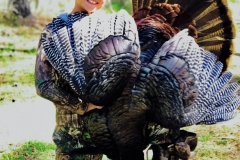 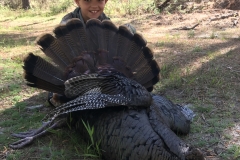 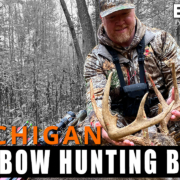 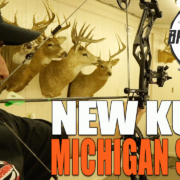 VIDEO: The Boss Is Coming 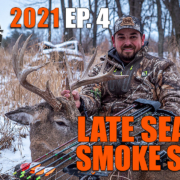 Treasure the Memories
Scroll to top